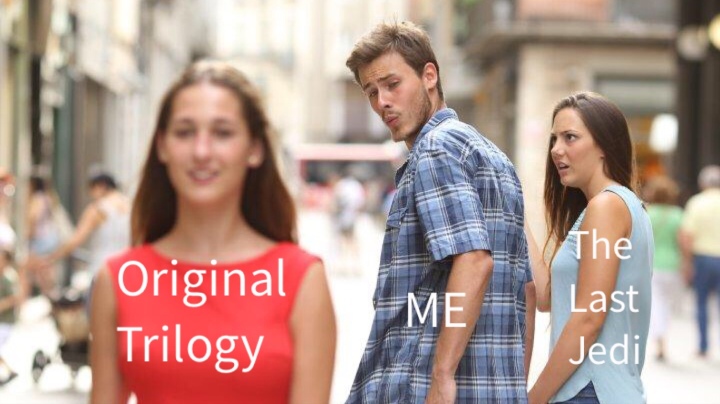 What can I say?

I hated “The Last Jedi”.

Not an uncommon take, I know, but it also made me appreciate other aspects of my life in an almost existential sort of self-reflection.

However, if you think I’m some sort of Juanito-come-lately that isn’t a true Star Wars fan who’s just riding the current Last Jedi Sandcrawler of Hate, allow me to submit:

So, yeah, Star Wars was kind of a big deal to me.

That all changed fairly recently, and to be completely fair, it’s not really George Lucas’ or Disney’s or anyone’s fault. It’s really my fault for hanging on so long.

But Rian Johnson’s complete lack of regard for what Star Wars was, and even worse, what it could have been, was an eye-opener for me. The more I thought about it, the more I came to realize it wasn’t even about the abomination of a movie that he had produced.

But first and foremost let me just say couple things about that “movie”.

Have all of those things and more!

But first, how about making it a good movie?

Instead I got poor John Boyega walking around in a plastic poncho with tubes spurting liquid everywhere, because, you know, funny.

It should be erased from our collective memories for its lack of vision. Rian Johnson and Co. had an entire universe at their disposal and chose to make this movie, in essence, a slow, meandering, slog of a spaceship chase with (unintended) laughable dialog, and cringe-inducing-not-funny-unless-you’re-the-writer’s-mother-and-even-then-you’d-be-thinking-“he-went-to-all-those-creative-writing-camps-for-this?” Jokes.

And Yoda. Why’d you have to drag Yoda out of Ghost Jedi retirement for this, Rian? Did he need one more paycheck that badly? Is the Afterlife Jedi Retirement Village that expensive? I just want to remind everyone that the only time, THE ONLY TIME, Yoda was ever child-like or non-serious, was when he first met Luke in The Empire Strikes Back. And that was in order to test Luke (as I describe in the link above). Did he suddenly develop Dementia as a phantasm when he was completely lucid for 900 years in the physical world?

This above everything else, above Luke’s Devil-may-care-toss-my-lightsaber-away-and-drink-blue-milk attitude, above what’s-her-name’s decision to crash into Finn at the last minute even though that could have just as easily killed them both and allow the Empire I mean, the First Order to kill everyone in the cave, above the Hyperspace maneuver that somehow has never been tried before and could have destroyed both Death Stars, above everything else, the way Rian treated Yoda tells me he wanted all of Star Wars kind to eat a big Turd Sandwich.

Because he doesn’t care. He was just making a movie. And at the end of the day, that was his job. He’s a movie director.

And that’s when it hit me. If he doesn’t care, why do I care so much?

Now as with many fans of the Original Series, I began my fandom as a kid. But when I first became aware of Star Wars, I didn’t even know English that well. It wasn’t until I was in the first grade that I really started becoming somewhat proficient at speaking in English, or even thinking in English more than in Spanish.

But I remember very distinctly my first moments of Star Wars. It must have been around 1986 or 1987 making me about 7 years old. My mom had left the house, so I had gone to our television set and switched it from its almost-permanent setting on Univision to one of the “American” channels.

Flipping through I remember being transfixed at what I saw. There were little bears with spears running through the forest, and they were fighting robots in white and black armor. And there were big gray robots shooting lasers everywhere.

I didn’t know what was going on, but I was hooked.

Thus began a long courtship with science-fiction and space and all things Star Wars.

And then I endured the Special Editions of the Original Series, but I was OK.

And then came the Prequels. They weren’t as good, but they were still Star Wars.

And then I saw a little light with The Force Awakens and Rogue One.

And then Rian Johnson took a Death Star shot of apathy to my Alderaan’s heart.

And I thank him for it.

It should be personal, certainly. But it shouldn’t be your personality.

And Rian Johnson did something that I would have deemed impossible in my younger days.

He made me not give a rat’s ass about Star Wars.

The new Han Solo Movie? Didn’t see it, don’t really care to, (and sure as hell don’t care who shot first).

What’s going to happen to all the characters in the next Star Wars Movie?

I hope they all die.

In fact, I hope What’s-her-name, Finn’s new girlfriend, is a double agent, and I hope she kills everyone in their sleep.

How’s that for not going along with what the fans are expecting, Rian?

Anyway, right before this trash-compactor fire of a film was released I finished writing my first book and I remember thinking at the time, that being able to watch the movie now that the writing and editing was done would be a sort of reward.

But it became much more than that.

It became a parable of sorts. Something to learn from.

I hate to go back to the well of Adam Carolla again, but the guy is a man of many, if not sometimes crude, insights.

He said “Don’t spend your time walking through other people’s museums. Spend your time creating things that will go in your museum.”

I’ve been much more rewarded since I finished my book than I ever was just being a fan of a movie or a sports team. I’ve gotten feedback from readers about something that I create from thin air. I’ve been asked to do a radio interview about my book and how I went about writing it. I’ve had my notions that maybe, just maybe, I could be a professional writer someday reinforced.

And besides, when Episodes 7-9 are abandoned and they decide to do the Thrawn Trilogy like they should have done in the first place, maybe a spark of fandom will be reignited in me.

Until then, thank the Force for Rian “should have been suspicious about a guy that can’t even spell Ryan correctly” Johnson and his Sarlacc-breathed atrocity that I don’t have to spend any more time in someone else’s universe, and instead can get busy creating my own.

7 thoughts on “Thank the Force for Rian Johnson”